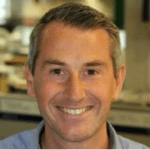 Steven Bell, editor of the Dundee Evening Telegraph, is leaving after 22 years with the company to become the city council’s head of communications.

He will leave  at the end of the month and take up his new position in mid-August.

Mr Bell previously served as the paper’s deputy editor and has been editor since Octobr 2015.

During his tenure the Telegraph launched its first weekend edition and celebrated its 140th anniversary.

Earlier this year, the DC Thomson owned title moved to a new city centre office alongside sister daily  The Courier.

No announcement has been made on a replacement editor.