Cochrane steps in as Carillion shares crash in weak trade 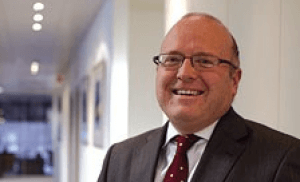 Former Weir Group and Stagecoach CEO Keith Cochrane has been installed as interim chief executive of construction group Carillion which has suffered a sharp deterioration in its outlook.

Shares in the group plunged 38% in the first few minutes of trading on the stock market this morning after it warned of weakening cash flow and rising debts in difficult market conditions.

The board is undertaking a “comprehensive review of the business and the capital structure”.

Chief executive Richard Howson is stepping down and is replaced temporarily by Mr Cochrane (pictured) who is formerly the company’s senior independent non-executive director. The board has begun the search for a permanent CEO.

Philip Green, non-executive chairman said: “Despite making progress against the strategic priorities we set out in our 2016 results announcement in March, average net borrowing has increased above the level we expected, which means that we will no longer be able to meet our target of reducing leverage for the full year.

“We have therefore concluded that we must take immediate action to accelerate the reduction in average net borrowing and are announcing a comprehensive programme of measures to address that, aimed at generating significant cashflow in the short-term.

“In addition, we are also announcing that we are undertaking a thorough review of the business and the capital structure, and the options available to optimise value for the benefit of shareholders. We will update the market on the progress of the review at our interim results in September.

Mr Cochrane was appointed to the Carillion board on 2 July 2015 and has served as the senior independent non-executive director since 1 September that year. He has also served as a member of the audit, remuneration, nomination, sustainability and business integrity committees.

Aged 52, he joined Weir as finance director in July 2006 and was appointed chief executive in November 2009, standing down in 2016.  Following a number of years at Arthur Andersen, he joined Stagecoach in 1993. He became the group’s finance director in 1996 and chief executive in 2000. He joined Scottish Power in 2003 and served as director of group finance.

In 2015, he was appointed as the UK Government’s lead non-executive director for the Scotland Office and Office of the Advocate General. He is a chartered accountant and a member of the Institute of Chartered Accountants of Scotland. He was elected a Fellow of the Royal Society of Edinburgh and appointed CBE in 2016.

H1 revenue expected to be similar to that in 2016 at approximately £2.5bn.