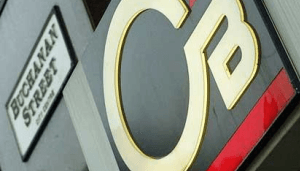 A campaign group is bringing a legal action against Clydesdale Bank over claims that it mis-sold loans to small businesses, many of which were later declared insolvent.

RGL Management Ltd said  it intends to bring a claim against the bank and its previous parent company National Australia Bank on behalf of what it believes to be as many as 6,000 businesses who purchased fixed rate tailored business loans (TBLs) between 2002 and 2012.

The campaigners say SMEs which took out TBLs later lost their businesses to insolvency as a result of the behaviour of the bank.

Funding has come from from Augusta Ventures to prosecute this litigation.

RGL expects to issue claims this year and says it has already recruited a significant number of SMEs.

James Hayward, the group’s chief executive is a lawyer and investment banker with experience in the US, UK and Australia.

He said: “Clydesdale’s conduct is actionable and we’ll be suing those involved in order to recover damages for those customers it harmed. Proceedings will probably be issued later this year, however the exact timing is difficult to predict and will depend primarily on what gives us the greatest tactical advantage. Anyone wishing to join the action should get on board quickly or risk being left out.”

Tailored Business Loan’ was the term used to refer to a brand of over 11,000 fixed and variable rate loans made to Clydesdale and Yorkshire Bank customers between 2001 and 2012.

More than 8,000 of these were fixed rate TBLs and RGL claims they contained embedded or hidden swaps which were not disclosed to customers who thought they were entering into a simple fixed rate loan.

The swap or hedging element was similar to that of a standalone interest rate hedging product.

The RGL team will be working with Michelmores LLP partner Garbhan Shanks.

A CYBG spokesman said: “Whilst we have seen reports of a potential claim being considered in relation to Tailored Business Loans, we have not received any such claim to date from RGL Management Ltd and it is therefore not possible to comment on speculation around any potential case or the basis for any claim.

“In relation to Tailored Business Loans, this is a long-standing historical matter which has been subject to significant scrutiny and which the Bank has been working through with customers as part of a wide-ranging remediation programme, in an open and transparent manner.

“We have made significant progress in resolving the vast majority of cases. Where we have reached a final agreement with customers, the cost of this has been covered by existing provisions as extensively disclosed in our financial reports.”