BAM Construction has signed a £30 million deal to deliver the main shell and core structure of a residential development around one of Edinburgh’s world heritage sites.

The company will be the lead contractor for The Crescent, a curve of 84 glass-fronted homes at the rear of the former A-listed Donaldson’s College. Cala Homes will fit out of the apartments.

BAM is responsible for constructing Dundee’s V&A Museum of Design and the Donaldson’s development, worth more than £90m, is among the most ambitious projects undertaken by Cala.

David McGrath, managing director of Cala Homes (East) said: “This has been a major focus of ours for the past few years and we fully understand the responsibilities of developing within the World Heritage Site.

“In BAM, we are confident that we have a construction partner with the credentials and expertise to match our own high standards in delivering such an ambitious project.

“It is incredibly important to us that our partners understand the importance of this site and work with neighbours to minimise disruption as far as possible. BAM has proven that it shares these values.

“This promises to be a one-of-a-kind development that we are extremely proud to be part of. This appointment is the next step in realising the final, exciting design.”

Bruce Dickson, regional director of BAM Construction, said: “We are thrilled to be involved in such an ambitious project here at The Crescent.

“It’s fair to say that this project has some challenges, but we’ve already been working in partnership together for over a year to resolve the majority of these before we put a shovel in the ground.

“Both of our teams are completely committed to delivering this really exciting project and its one that, once completed, will definitely be an impressive addition to Edinburgh’s architectural legacy.” 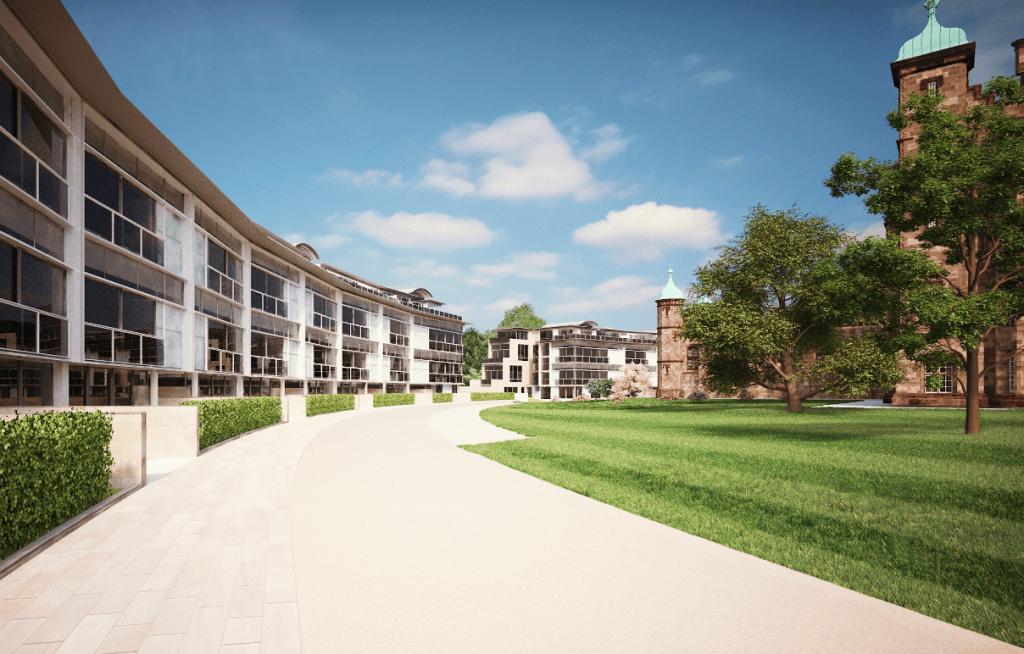 Preparatory work, also carried out by BAM Construction, began in May and involved a significant excavation to create the underground parking, part of the design intended to keep the site as free from cars as possible once it is completed and landscaped.

Following this, construction will commence on the westernmost half of the split crescent, to create a stylish, glass-fronted building which cleverly takes a number of design cues – primarily height and form – from the finest buildings in Edinburgh’s celebrated Georgian New Town.

The crescent form of the design itself has also been carefully considered to connect the site with a prominent feature of Georgian architecture, while perfectly complementing and interplaying with the Playfair building. Several examples of Georgian crescents exist in Edinburgh’s New Town.

The turreted Playfair building is one of the most recognisable in Edinburgh and was most recently home to Donaldson’s School for the Deaf. Rising costs saw the school move to a purpose-built new campus in Linlithgow, West Lothian in 2008.

The site was bought by Cala but mothballed for a number of years. Plans to restore the building and transform the wider location were drawn up with extensive consultation with the local community and heritage groups.

Restoration specialist City & Country took on the conversion of the building into a variety of apartments.