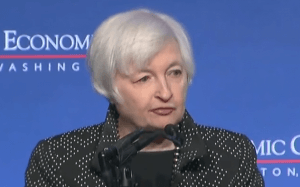 It the second rise this year, taking the rate to its highest since 2008.

The Fed said it was in response to US economic growth and the robust job market, although new data pointed to weaker trade.

Retail sales fell 0.3% last month – the largest fall since January 2016 and below economists’ expectations for a 0.1% gain.

“Our decision reflects the progress the economy has made and is expected to make,” said Federal Reserve chairman Janet Yellen (pictured).

Asian markets edged lower following falls in the S&P 500 and Nasdaq, although the rate increase was already priced into most stocks.

Tom Stevenson, investment director for personal investing at Fidelity International, said: “There was never much doubt that the Federal Reserve would raise interest rates by a further 0.25%.

“Having set out its proposed tightening path in March, it would have taken more than the recent softer inflation data and weaker than expected jobs figures to blow the Fed off course.

“Unemployment has fallen to a 16 year low of 4.3% and economic growth is on track. The guidance for one more hike this year remains in place, according to the latest ‘dot plot’ projections which show rate-setters’ expectations of the timing of future rate moves.

“More important was what the US central had to say about its plans to rein in its bloated balance sheet, which has ballooned to $4.5trn since the financial crisis as the Fed has bought government and mortgage-backed bonds to underpin the American economy.

“The Fed said today that it would decrease reinvestment of maturing bonds at a steadily increasing rate until after a year it is holding back $30bn a month on Government bonds and $20bn on mortgage backed securities.”

What does it mean for investors?

Recent wobbles in the red-hot technology sector have in part been driven by fears about the Fed’s tentative return to monetary normality. The highly-rated US stock market remains vulnerable to rising interest rates and a tightening of financial conditions as the extraordinary monetary experiment of the past 10 years starts to be unwound.