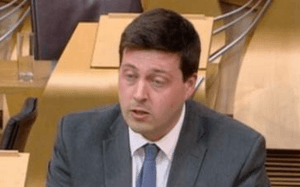 Scottish unemployment fell by 17,000 in the last quarter to its lowest rate for 25 years and employment rose by 14,000.

Figures for the three months to April show unemployment is down by 0.6% to 4%, equalling the figure for March to May 2008.

The Labour Market Stats for Feb-Apr 2017, published by the Office for National Statistics (ONS), show Scotland’s unemployment rate continues to be the lowest out of the four UK nations, and lower than the UK rate of 4.6%.

Scottish minister for Employability and Training Jamie Hepburn (pictured) said: “Scotland’s unemployment rate is at its lowest rate since the recession and matches the lowest on record for Scotland since the series began. With the employment rate rising, it’s clear this is hugely positive news for our economy and the jobs market.

“Once again, despite adverse prevailing economic conditions, Scotland’s job market continues to be resilient and robust, with female and youth unemployment rates lower than the UK average.”

Liz Cameron, chief executive of Scottish Chambers of Commerce, said the figures were “good news” but warned that there were other pressures in the economy.

“There remain some areas of concern, not least the news that average earnings are continuing to lag behind inflation.

“Low productivity rates dictate that earnings growth may be unlikely to improve significantly over the short term and, with inflation having risen by more than expectations, the pressures on consumer demand, business margins and future business investment continue.

“Scotland has also experienced a significant rise in the number of people dropping out of the labour market altogether over the past year.

“Coupled with continued reports of hard to fill vacancies amongst Scottish businesses, this underlines the need for government to increase investment in training opportunities, not only for young people, but also for older workers to enable people to upskill and reskill and get back into the workforce.”

Colin Borland, FSB’s head of devolved nations, called for any tax rises planned by the UK government to be shelved to maintain the jobs progress.

He said: “While there is still work to be done to create jobs for the 109,000 Scots out of work, this is good news.

“Despite consistently low confidence from small businesses over the past two years, these figures show that Scotland’s smaller businesses are still hiring. It is therefore incumbent upon the new UK Government to shelve plans for any potential increases to National Insurance Contributions for these vital job creators.”