As Leonardo opens in Haymarket 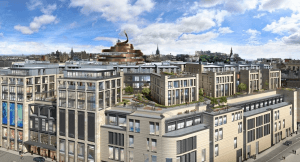 Developers of the £1 billion St James Centre in Edinburgh have let one of the hotels to Roomzzz Aparthotel.

The property will feature a rooftop terrace and balconies and forms a key stage in the pre-letting process at St James which is is the largest retail-led mixed-use regeneration project currently underway in the UK.

Ed Webb, director of development management for developer TH Real Estate, said: “With more than 1.5 million international visitors making their way to the city each year, Edinburgh remains a strong choice for both UK and international leisure operators.

“The aparthotel, alongside the W Edinburgh, Everyman Cinema, rooftop restaurants, cafes, bars, shops, public spaces and homes, will create a bespoke destination, opening up a new vista with unique views across the city – creating a place that is actively sought-out by residents and visitors alike.”

Chief executive of Roomzzz, Naveen Ahmed, added: “Set to become the city’s hottest new retail destination and with excellent transport links, the Edinburgh St James development is the perfect location for the Roomzzz brand to launch its first aparthotel in Scotland.

“Our expansion into the Scottish capital is a significant milestone for Roomzzz as we look to grow our successful portfolio of luxurious aparthotels across the UK.”

JLL acted on behalf of TH Real Estate, and Christie and Co acted for Roomzzz.

> Leonardo Hotels, one of Europe’s fastest growing groups, has opened its first outlet in Scotland after investing more than £6 million in the refurbishment of a former Premier Inn site in Edinburgh.

The 282-room Leonardo Royal Hotel Edinburgh, opposite the Haymarket development and close to the Edinburgh International Conference Centre, takes its portfolio to more than 80 hotels in 40 locations.

Interior designer Andreas Neudahm created the hotel’s look and continues the Leonardo Hotels’ philosophy of developing hotels that each have their own character with a clear link to their location.

It is understood that Premier Inn has reserved a new property in the Haymarket development,