Jamie Murray became the first Briton to win the Aegon Championships doubles title for 27 years when he partnered Brazilian Bruno Soares to victory at Queen’s.

The pair saw off the French duo Julien Benneteau and Edouard Roger-Vasselin 6-2, 6-3 to win the trophy and split £100,000 between them.

“These are the best tournaments, the best grass courts to play on. I couldn’t ask for more,” said Murray, who won at the 11th attempt.

The Scot and Soares first had to complete their semi-final, as they trailed Croatia’s Marin Cilic and Poland’s Marcin Matkowski 1-6 5-3, 40-40, when play was suspended because of rain on Saturday.

Cilic returned to the court less than an hour after losing the singles final to Feliciano Lopez, but Murray and Soares went on to win 1-6 6-3 10-8.

“We played a great match, a long day today, but it was worthwhile,” added Murray.

Former British No. 1 Jeremy Bates was partnered by American Kevin Curran when the pair won the title in 1990.

Meanwhile, Judy Murray has revealed that she thinks Jamie will team up with brother Andy to have a shot at the Wimbledon doubles title before they retire.

“I’m pretty sure before they get to the end of their careers they’re going to have a crack,” she said.

“At the moment while they’re happy and healthy they’re quite happy doing their own thing – but I’m pretty sure you’ll see them playing Wimbledon together before they end their careers.” 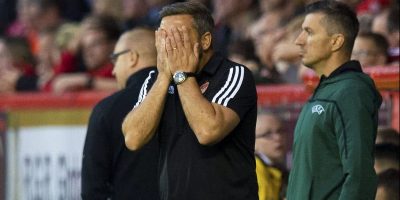 Time up: Derek McInnes (pic: SNS Group). Aberdeen have started the search for a newRead More