Motherwell team up with McEwan Fraser 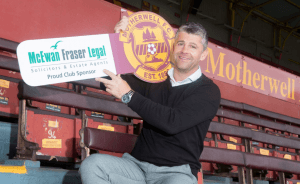 McEwan Fraser Legal has increased its involvement in Scottish football by becoming the main sponsor of Motherwell FC.

McEwan Fraser Legal replaces Motorpoint as the club’s principal sponsor and will adorn the front of the new home, away and goalkeeper shirts, with the new kit due to be released soon.

The new backers labelled the deal as “significant” and McEwan Fraser Legal chief executive Ken McEwan said: “Being a supporter-owned club was a key factor in our decision to support the Steelmen.

“Motherwell, like ourselves, are committed to thinking differently. For Motherwell, it’s about building a sustainable future with the club in the safe hands of supporters, and that’s something we are delighted to support.”

Motherwell FC head of commercial and marketing Suzanne Reid commented: “This agreement is undoubtedly testament to the ownership of the club under the stewardship of The Well Society, something McEwan Fraser Legal made clear during this process.”

It is the second piece of good news to come out of Fir Park in the space of 24 hours, with the club having confirmed yesterday the signing of attacking midfielder Craig Tanner from Reading on a two-year deal.

The 22-year-old was manager Stephen Robinson’s third recruit of the summer following the arrival of Alex Fisher from Inverness CT and Gael Bigirimana from Coventry City as Motherwell looks to rebuild after a ninth-place finish in the Premiership.

Meanwhile, new Kilmarnock manager Lee McCulloch has made it a priority to attract more fans to Rugby Park by reaching out to the community.

“We need to try and get everyone together, start connecting with the community and get winning displays on the pitch.”

The 39-year-old had been interim boss since February following the departure of Lee Clark.