'No overall majority' for Tories

May election call looks to have backfired – poll 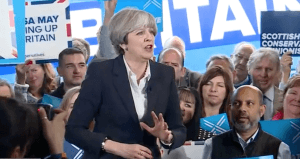 Theresa May’s gamble on calling a General Election is poised to backfire, according to the latest opinion poll from YouGov.

The Conservative party is seen winning 305 seats on Thursday – 21 short of the 326 needed for an overall majority.

That result would represent a loss of 25 seats for the Tories, and a further dip from the 308 seats they were forecast to win in YouGov figures released on Saturday. An ICM poll suggests no change, giving the Tories a comfortable majority.

The new YouGov poll confirms Jeremy Corbyn’s ascendancy with Labour projected to win 268 seats, against a prediction of 261 over the weekend.

Mrs May, who is in Scotland today, called the election in the hope of securing a clear mandate for talks with the European leaders over Britain’s exit from the EU. At the time, in mid-April, the Tories held a comfortable lead over Labour.

In recent weeks Mr Corbyn has gained ground as Mrs May stumbled over social care policy and she refused to share a television platform with other leaders.

The ICM poll saw the pound recover from earlier lows, rising 0.13% against the dollar at $1.2905. It said the Conservatives are on 45%, unchanged from last week’s poll, compared to Labour’s 34%, up one point.

Another model, produced by Lord Ashcroft Polls, last week predicted the Conservatives were on course for a majority.