Shareholders on Monday will give the go-ahead to the merger of Standard Life and Aberdeen Asset Management and immediately plunge the £11 billion mega-business into a fresh round of speculation about its future in the pensions and savings business.

After the votes are counted to confirm the creation of Standard Life Aberdeen, the new company is expected to pursue a quick-fire acquisition of Scottish Widows.

This revives speculation from earlier this year. Analysts at RBC, who may have been the source of this weekend’s report, said in April: “We see it as more likely that Standard Life and Scottish Widows (owned by Lloyds Banking Group and also based in Edinburgh) are spun off and merged.”

Yet there had been talk of Standard Life selling its insurance business. RBC reckoned it could get more for it from a buyer than its implied valuation from the company’s share price.

Talk of selling the business gathered momentum after it emerged that it will not be represented on the 16 member board of the new company (which we now hear will be reduced over time).  Standard Life Aberdeen is also being re-classified in the FTSE indices as an asset manager, another indication of its intended change of status.

But selling now seems to be off the table. CEO Keith Skeoch last week confirmed that the new company may be willing to offload its £16.1 billion annuity portfolio but said it has “no plans” to dispose of the insurance business.

A deal involving the various parties would not come as a surprise as it would build on a number of links, historic and current. Lloyds is under pressure to do something since new EU rules have made it less appealing for banks to own insurers. Lord Blackwell, the Lloyds chairman, once sat on the Standard Life board, so knows both companies well.

Most significant, perhaps, is that Aberdeen Asset Management not only owns Widows’ asset management business, following its purchase of Scottish Widows Investment Partnership (SWIP) in 2013, it currently manages the insurance assets of Scottish Widows. 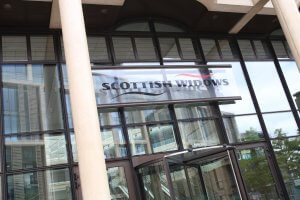 RBC believes this puts Lloyds in a strong bargaining position with the new Standard Life Aberdeen group and it could use this to its advantage to extract a good price for SWIP.

Skeoch, who becomes the day-to-day manager of the new group under its co-CEO plan, has made no bones about the shift in focus of the group towards asset management, but his commitment to the low margin life business has remained a puzzle to many observers.

At an investor conference in April, soon after the deal with Aberdeen was announced, Skeoch was asked once again whether Standard Life was moving towards becoming an investment house rather than a life insurer.

“We are – yes, you are right in terms of becoming more of a world-class investment company than a life assurer. I would argue this is a process that was put in place about 13 years ago,” he replied.

If it is moving away from being a life insurer, then why buy Scottish Widows?

The latest talk points to Standard Life Aberdeen wanting to fatten up both sides of its business, possibly as a means to getting a good price for the whole group when, as some believe, it is eventually sold, probably to the Americans.

Maybe all will be made clearer at Monday’s general meeting.