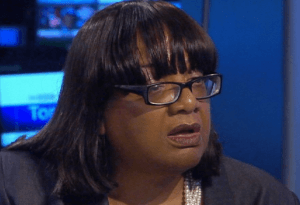 Shadow home secretary Diane Abbott has temporarily stood down from the post because of ill health, Labour has announced.

Ms Abbott, who has been replaced by Lyn Brown, yesterday pulled out of an appearance on BBC Radio 4’s Woman’s Hour. Shadow defence secretary Emily Thornberry stepped in to replace her.

This came after an embarrassing interview on Sky News with Dermot Murnaghan. Ms Abbott was unable to answer questions on recommendations made in a key counter-terrorism review in October about how best to prevent London from terror attack.

Ms Abbott was unable to recall details of the review by Labour’s Lord Harris, despite insisting she had read the review, commissioned by London Mayor Sadiq Khan.

Ms Abbott was also withdrawn from an Evening Standard election event. The newspaper’s editor, former Chancellor George Osborne, tweeted: “It’s not like someone who wants to be Home Sec has much to talk about these days.”

She has drawn criticism over her handling of the brief and a much-publicised mix-up over Labour’s plans to finance an increase in policing.

A spokesperson for Ms Abbott said: “Ms Abbott will not be talking about her health at this time. There can be no more distractions from the real issues of this General Election.

“Ms Abbott will be joining Labour party colleagues to get the vote out on Thursday.”

This is the latest occasion that Ms Abbott has withdrawn from public appearances during high profile events.

In February she missed a Commons vote on triggering Article 50 – apparently because she had a migraine.

Her constituency, Hackney North and Stoke Newington, voted overwhelmingly for remaining in the European Union.

But her party imposed a three line whip stipulating its MPs should not block Article 50 – meaning the vote looked set to be uncomfortable for her.