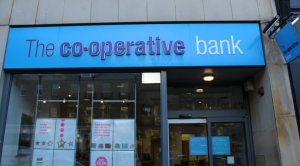 The Co-op Bank has agreed a £700 million rescue package with investors that will bolster its balance sheet.

Existing investors are swapping their bondholdings for cash and shares, to help it meet regulatory requirements on capital.

The deal follows months of negotiations after it put itself up for sale in February. It almost collapsed in 2013 after losses from problem property loans.

It announced earlier this week that it was no longer for sale after reaching agreement with its investors.

Chairman Dennis Holt said today: “The proposal today should lay the foundations to help secure the future of the Co-operative Bank..

Co-op Bank provides banking services to almost 4 million retail and small and medium-sized enterprises in Britain. The deal will allow it to survive as a standalone entity,

The investors will also pump £100m into the bank’s pension scheme over the next ten years to secure its separation from the wider Co-op Group pension scheme.

Linkedin
News, UK No Comments » Print this News
Tesco is axeing 1,200 jobs at its head office in a cost-cutting measure Previous News
Next News Ambitious ZoneFox bolsters its senior team