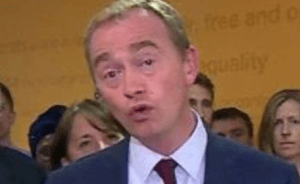 Tim Farron has stepped down as leader of the Liberal Democrats, saying he was “torn between living as a faithful Christian and serving as a political leader”.

He said he should have dealt “more wisely” with questions relating to his faith during the election campaign, including his views on gay sex.

The Archbishop of Canterbury Justin Welby said Mr Farron was “honourable and decent”.

Mr Farron made his announcement surrounded by his close colleagues and insisted his decision was voluntary.

During the general election campaign, he was asked to clarify his views on gay sex. He said he did not believe it was a sin and that, while he believed political leaders should not “pontificate on theological matters”, it was right to address the subject as it had become “an issue”.

“The consequences of the focus on my faith is that I have found myself torn between living as a faithful Christian and serving as a political leader,” he said.

“A better, wiser person may have been able to deal with this more successfully, to remain faithful to Christ while leading a political party in the current environment.

“To be a leader, particularly of a progressive liberal party in 2017 and to live as a committed Christian and to hold faithful to the Bible’s teaching has felt impossible for me.”

Mr Farron succeeded Nick Clegg in 2015 after the party lost nearly 50 seats and increased its tally of seats from nine to 12 at last week’s election, even though its vote share fell from 7.9% to 7.4%.