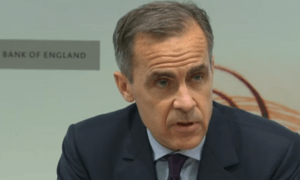 He said now is not the time, warning that weak wage growth could undermine growth as Britain prepares to leave the European Union.

In a speech to London’s banking community Mr Carney made it clear that he did not support three members of the Bank’s monetary policy committee who last week voted to raise rates from their record low of 0.25%.

Sterling plunged by three quarters of a cent against the dollar after Carney’s remarks, and 10-year gilt yields dipped below 1%.

Finance minister Philip Hammond told the same Mansion House audience that it was important to avoid a “cliff edge” when Britain quits the EU in 2019 and to have a transitional deal on trade before a full agreement is reached.

Mr Carney said that if there was insufficient progress on this, businesses in Britain and other EU countries might soon start to activate their own Brexit contingency plans.

“Before long, we will all begin to find out the extent to which Brexit is a gentle stroll along a smooth path to a land of cake and consumption,” he said.

Howard Archer, chief economic adviser to the EY ITEM Club, said: “The clear message coming from the Bank of England’s Governor’s delayed Mansion House speech is that now is not the time to raise interest rates. This message took on even more significance following the surprising close 5-3 vote in last week’s MPC meeting.

“The Governor is particularly cautious over UK growth prospects as Brexit negotiations get underway. In addition, he appears to be in “wait and see” mode indicating that he wants to see the extent to which other elements of demand offset weaker consumer spending over the coming months, and whether wages start to firm up.

“Mark Carney’s cautious stance fuels our belief that interest rates will not be rising any time soon, given a stuttering UK economy and uncertainties over its outlook. This view is further reinforced by the fact that the balance within the MPC could be significantly different at the next meeting in early-August.

“The strongest advocate of raising interest rates has been replaced and there are no indications as to where the newly appointed MPC member stands on where interest rates should be. Additionally, the MPC could have a ninth member in place for the August meeting, as it is currently one short following the resignation of Charlotte Hogg.

“We maintain the view that the Bank of England will hold off from raising interest rates in 2017. A tightening in 2018 also looks highly questionable given the cloudy outlook.”