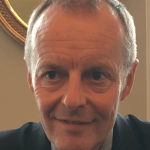 Hampden & Co, the private bank, has appointed George Grierson who worked for Lloyds Bank for nearly 30 years, including five leading its private client business in Scotland.

He has also worked outside the finance sector, including recent spells at the creative agency Guy & Co, and the charity CHSS.

Welcoming Mr Grierson, Graeme Hartop, chief executive of Hampden & Co, said: “The growth in client numbers and our balance sheet has been strong.”

He said the bank’s first full year’s results will be released in a few weeks’ time.

“The huge interest we have had from the banking community, and the volumes of people interested in joining us is a massive compliment,” he said.