PM steps up fight after 7 die in terror attack

‘Enough is enough. Things need to change’ says May

Prime Minister Theresa May has pledged a new campaign against the “evil” of Islamic terrorism and said “things need to change” as she responded to an attack that left seven people dead on the streets of London.

She promised to “take on and defeat our enemies” and outlined a toughening of measures following a meeting of her security council.

“Enough is enough. Things need to change,” she said, demanding more action from internet companies and help from the public.

One of those killed was a Canadian woman, Christine Archibald, from Castlegar, British Columbia.

The French foreign minister, Jean-Yves Le Drian, confirmed that a French man was among those killed, but he has not been named.

New Zealander Oliver Dowling was stabbed in the face, neck and stomach. His partner Marie Bondeville was also injured.

Geoff Ho, a Sunday Express journalist, was in intensive care after being stabbed in the throat.

Twelve people were arrested in Barking, east London, following a raid at a flat belonging to one of the three attackers.

A further 48 were injured in the attack and police shot three suspects dead after a white van drove into pedestrians on London Bridge.

Three men got out and began stabbing people in nearby Borough Market. The men were wearing fake bomb vests.

“We cannot and must not pretend that things can continue as they are,” Mrs May said in a televised statement in front of her Downing Street office.

“We believe we are experiencing a new trend in the threat we face as terrorism breeds terrorism, and perpetrators are inspired to attack not only on the basis of carefully constructed plots after years of planning and training, and not even as lone attackers radicalised online, but by copying one another and often using the crudest of means of attack.”

She identified four changes required in order to step up action against terrorists.

The first was the fight against the “evil ideology” inspiring the repeated attacks, which she called a perversion of Islam and of the truth.

The fight could not be won through military intervention alone, she said, adding that there was a need to defend pluralistic British values that were superior to anything offered by the “preachers of hate”.

New regulations were needed to reduce the space available to extremists online.

“We cannot allow this ideology the safe space it needs to breed. Yet that is precisely what the internet and the big companies that provide internet-based services provide,” Mrs May said.

“We need to work with allied democratic governments to reach international agreements that regulate cyberspace.”

Thirdly, she demanded more to be done to identify and stamp out extremism across British society.

A final measure was to review the counter-terrorism strategy.

She said that if an increase in jail sentences for terrorism-related offences, even apparently minor ones, were needed, then it would be done.

One police officer was seriously injured in the attack though his life was not believed to be in danger. The area was cordoned off and armed police were despatched in response. They were able to neutralise the suspects within eight minutes of the incident beginning.

Armed officers ‘fired 50 rounds’. A member of the public was wounded in the head by a police bullet. More than 80 medics attended the scene to treat the injured. 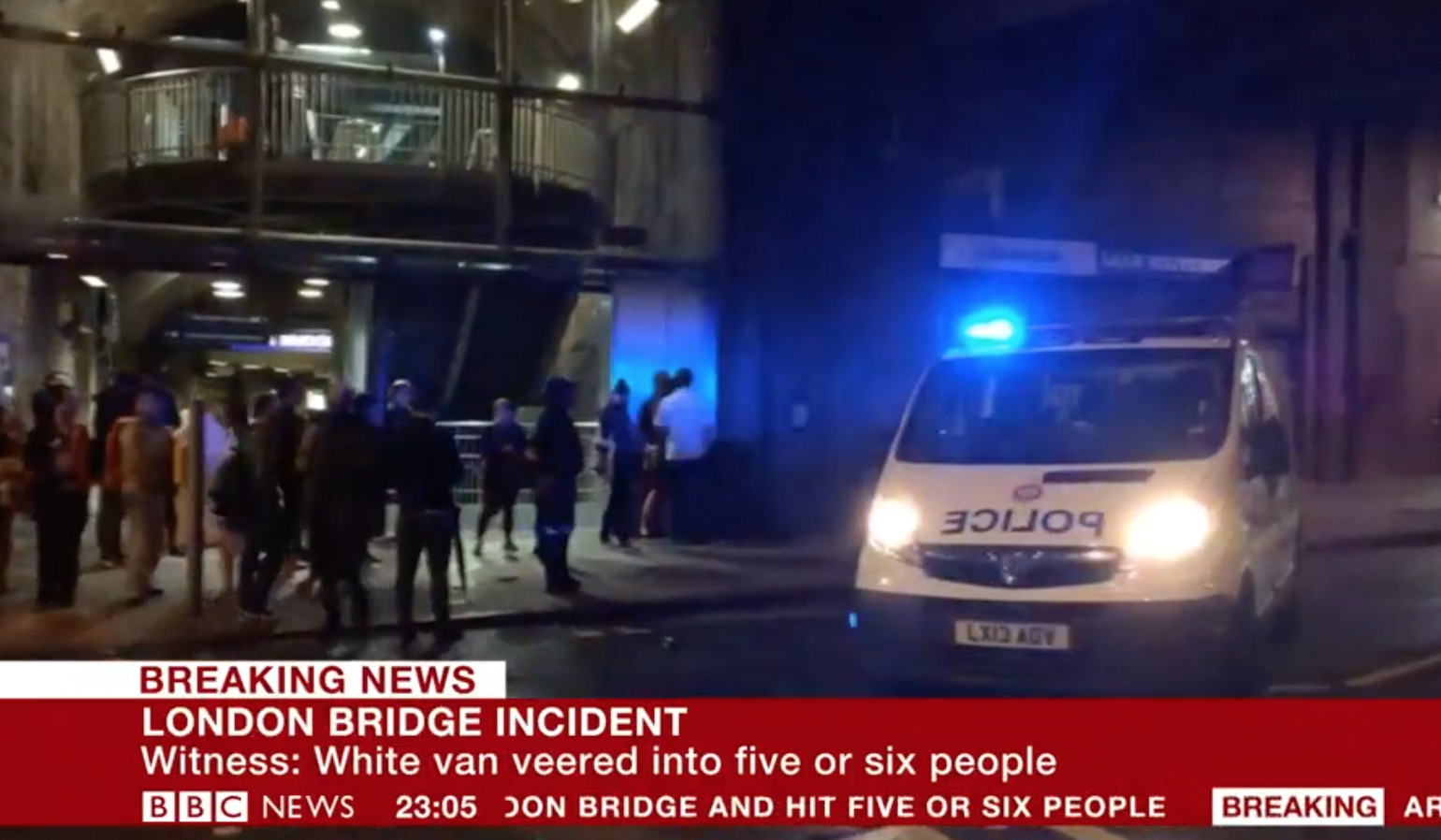 One social media user posted a photograph appearing to show one of the attackers lying on the ground outside a pub in the food market.

A bomb disposal team was later called to Borough Market and local residents were told to leave their homes.

BBC reporter Holly Jones, who was on London bridge at the time of the incident, said the van was driven by a man and was “probably travelling at about 50 miles an hour”.

About five people were being treated for injuries after the vehicle mounted the pavement and hit them, she said.

She said the van, which was travelling from the direction of central London, headed towards the south side of the river.

Ms Jones later reported seeing a man being arrested by police. She said he was handcuffed and had his shirt off.

It is the third terror attack in the UK in three months following the car and knife attack in Westminster in March, which left five people dead, and the Manchester bombing less than two weeks ago, in which 22 people were killed.

MI5 says five plots have been uncovered and stopped in that same period.

“I am refusing to suspend the UKIP campaign because disrupting our democracy is what the extremists want,” he tweeted.

Scottish Labour leader Kezia Dugdale’s visit to East Lothian did not go ahead.

Home Secretary Amber Rudd said: “This was an horrific attack in the heart of our capital city, targeted at people enjoying their evening with friends and family.

“My thoughts are with the victims and all those affected by this incident. As ever, in difficult and traumatic circumstances, I am extremely proud of and thankful to our police and emergency services who responded so swiftly and those who will work tirelessly as the investigation into this appalling act continues.”

David Davis, Brexit Secretary in the last parliament, said: “They may be deliberately trying to disrupt the General Election”.

Labour leader Jeremy Corbyn said he was “shocked and horrified” and said the election process should not be disrupted.

There was additional security in Manchester ahead of the One Manchester concert, at Old Trafford Cricket Ground.

* The first funeral of one of the 22 victims of the Manchester Arena terror attack will take place.

Eilidh MacLeod, who was 14, will be remembered in a ceremony at Church of Our Lady, Star of the Sea in Castlebay on the island of Barra in the Outer Hebrides.

Her friend Laura MacIntyre was badly injured in the bombing and remains in hospital.