Investors have the opportunity to help bring single malt whisky distilling back to Edinburgh for the first time in 90 years.

Holyrood Distillery has launched a £5.5 million funding drive to complete its funding drive for the long-planned facility. It was not clear what form of funding is being sought: angel, crowd funding, private equity or bank support.

The fund-raising, led by Johnston Carmichael, follows Edinburgh Council’s decision last year to approve redevelopment of the 180-year-old Engine Shed building and site on St Leonard’s Lane into a distillery and visitor centre.

Funds raised will also be used to purchase and install equipment, create the visitor experience and provide working capital to cover the early costs of start-up and production. 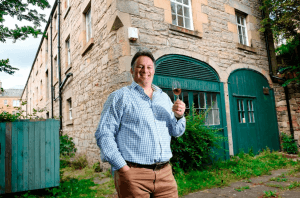 It is a joint development by David Robertson (right), former Master Distiller for The Macallan, and Rob and Kelly Carpenter, founders of the Canadian branch of The Scotch Malt Whisky Society.

The distillery plans to begin production of a range of single malts, gins, liqueurs and other spirits in late 2018, with bottles hitting the shelves as early as 2021.