36 breweries through to awards final

Finalists in the second annual Scottish Beer Awards have been announced with 36 breweries and 146 beers all brewed in Scotland progressing to the finals of the national competition.

The successful candidates represent just over half of the entered beers received in the highly regarded programme sponsored by ALDI.

The awards cover both taste and business performance and were judged last week by an experienced judging panel consisting of some of Scotland’s foremost brewing and beer experts.

Of the finalists, Borders-based Tempest Brewing leads the race with 12 beers reaching the finals in the taste categories.  Stewart Brewing are next with 9 beers and Cromarty Brewing, the rural brewery based in the Black Isle, has 8 beers in the finals.

Five breweries will fight it out for the ultimate award, The Scottish Brewery of the Year, presented by ALDI.  BrewDog, Fyne Ales, Innis & Gunn, Stewart Brewing and last year’s winner, Tempest Brewing Co.

266 Scottish beers were tasted by 27 judges and were marked according to a range of tasting standards set by the international sensory management consultancy, Cara Technology.   In addition, 83 written entries covering breweries’ business performance in marketing, innovation and product development, were debated in a session which was chaired by former S&N Technical and Quality Director, Hilary Jones.  She commented;

“To make it to the final stage is an achievement in itself.  Due to the huge surge in the volume and range of beer entered this year, only around half of the entered beers have progressed to this stage. 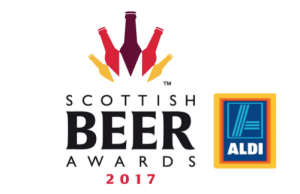 “The beers which have made it to the final had to achieve a high standard of marks in the rigorous tasting session all of which was conducted blind and managed by the excellent technical team at Cara Technology.

“The finalists we have selected in the business awards clearly demonstrate the strength and potential of the brewing industry in Scotland.”

In the business categories, a new category has been created for Breakthrough Brewery of the Year to recognise the exceptional potential of new breweries trading within the last two years which have managed to create a range of successful products.  The finalists are Cross Borders Brewing, Dead End Brew Machine, Fierce Brewing, The Ferry Brewery and Up Front Brewing

Finalists are now being sent a digital marketing package to enable personalised branding of finalist beers to take place.  The finalists will also receive branding support in the aisles of ALDI supermarkets in Scotland.

Graham Nicolson, Group Buying Director for ALDI in Scotland, said: “ALDI has been a big fan of Scottish brewing for many years and craft beer will always have a place on our shelves.

“It’s a great pleasure to be the headline sponsor of the Scottish Beer Awards for the second year running. Scotland’s beer industry is booming and we’re incredibly proud at ALDI to have worked with so many of the amazing breweries shortlisted at these awards. The success the industry is experiencing has been a long time coming, and the quality of the beer produced in Scotland is truly world class. We wish all the finalists the very best of luck”

All medal winners will be announced at an awards celebration and gourmet beer-paired hosted by Hardeep Singh Kohli, on Thursday 28 September 2017 at the Edinburgh Corn Exchange.

THE FINALISTS IN FULL

Tempest Brewing Co, In the Dark We Live Dark Fruits

Loch Lomond Brewery, Out of Range

Out of Town, Killer Steam

Out of Town, Glasgow Porter

Beer Bar of the Year

Innovation of the Year

Out of Town Brewing

Breakthrough Brewery of the Year