Restructuring 'comes at a cost'

M&S ‘running out of excuses’ as profits slump 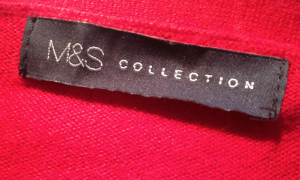 Marks & Spencer was accused of “running out of excuses” after reporting a 63.5% plunge in pre-tax profits.

It follows a fall in clothing sales and higher costs from opening food stores. There were “adjusted items” costing £437.4m.

The shares fell 3.5p on the opening of the London stock exchange, but by mid-morning were trading 2% or 7.5p higher. They slipped back in later trade but were still higher on the day.

Adjusted profit before tax for the year to the end of March was down 10.3% at £613.8m due to the expected decrease in Clothing & Home sales and increased costs of new space. Sales were flat across the business at £10.6 billion.

Steve Rowe,  CEO said: “Last year we outlined a comprehensive plan to build strong foundations for the future.  We said we would recover and grow clothing and home, continue with our plans for Food growth, remove costs and simplify the business.

“We achieved a huge amount in the year and whilst there is still much to do, I am pleased with our progress and we remain on track.”

But John Ibbotson, director of the retail consultancy, Retail Vision, commented: “M&S has run out of excuses. No amount of stammering about the mild winter or the weak pound can mask the fact that these results are nothing less than awful.

“For years the brand’s successful food range provided a fig leaf that spared the blushes of its underperforming clothes ranges. No longer – stalling food sales and profit over the past year have revealed the full, naked weakness of the brand’s unappealing clothing lines.

“With inflation eating into the profits of the once reliable food offering, and a string of one-off expenses slicing into profits elsewhere, the net result has been to send pre-tax profits tanking by nearly two-thirds.

“The second phase of Steve Rowe’s turnaround strategy was supposed to deliver a fightback, closing stores and reallocating floor space from clothing to food. But it’s not working fast enough.

“Trialling an online food delivery service later this year is welcome but it’s too little too late, and it won’t improve profits.

“Fundamental problems still remain. M&S has too many High Street stores in the wrong locations and too much competition in both fashion and food, online and instore.

“The appointment of the former Asda chief executive, Archie Norman, as M&S’s new chairman is to be welcomed. Drastic action is needed to turn around M&S and Norman will not be afraid to take it.”

Mr Rowe continued: “As we have made improvements to our Clothing & Home product and proposition, our customers have noticed; we are starting to stabilise market share and importantly have seen full price market share growth, as we removed excessive discounting.  In addition, our new Food stores continue to exceed our expectations.

“As we anticipated, the planned restructuring of M&S has come with a cost and has impacted profits, but the business is still strongly cash generative and we reduced our net debt.

“Looking ahead, we will continue our programme of self-help in a tough trading environment.  We remain committed to delivering for our customers and shareholders as we build sustainable foundations for the future.”

Clothing & Home gross margin up 105 basis points with full price sales growth of 2.7%.  As expected, revenue down 2.8% due to planned reduction in promotions and clearance sales.

UK costs were up 3.8% due to costs of new space, IT investment and inflation, offset by efficiencies.

International profit before adjusted items rose 15.4% to £64.4m, as a result of the decision to exit owned stores in 10 loss-making markets.