Steve’s symposium joy is out of this world 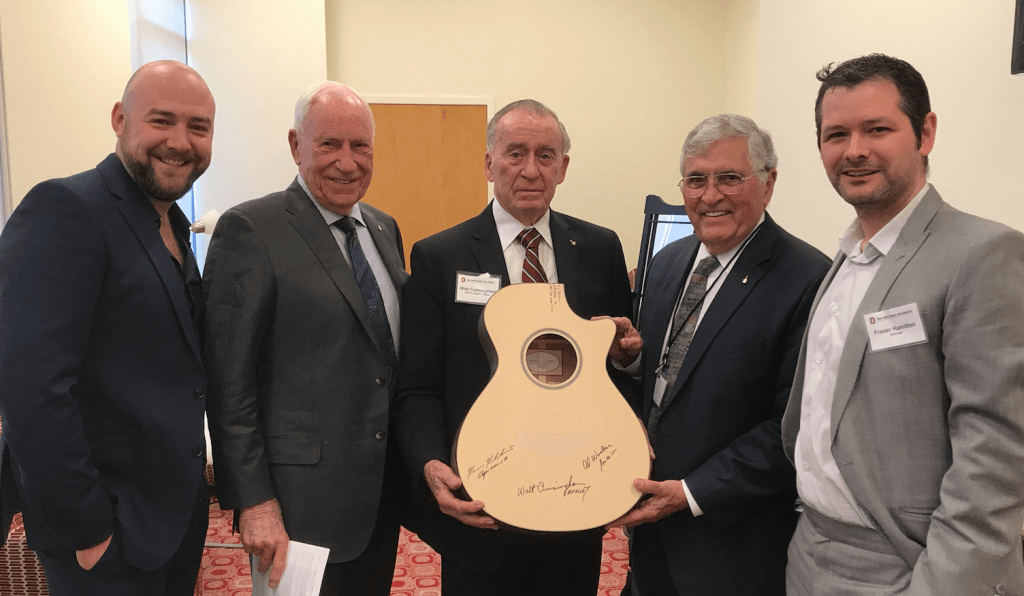 Steve Lee’s work in the space industry was rewarded this week with an invitation to join a symposium in the US attended by some of the most famous names in the sector.

Astronauts and a clutch of eminent academics honoured the character and accomplishments of the first man to walk on the Moon, Neil Armstrong, at The Ohio State University.

Among those present along with Armstrong were Michael Collins of Gemini 10 and Apollo 11 , Walt Cunningham of Apollo 7, Al Worden, Apollo 15 and Dr Harrison Schmitt, the last living crew member of the final mission to the Moon, Apollo 17, as well as the only geologist to explore the lunar surface.

Mr Lee, who runs Musselburgh-based Astrosat, was invited to moderate a panel discussion at event. He was accompanied by chief operating officer Fraser Hamilton.

He said: “It was an incredible honour for me to attend the Symposium, and even more so to have been invited to moderate a panel. I believe plenty of productive ideas came out of it and we can follow Neil Armstrong’s example in positively, and profoundly, influencing the future of space.

His invitation arose as a result of Astrosat’s work in providing space based solutions to Earth bound problems, alongside Dr John M Horack, whose installation as the inaugural Neil Armstrong Chair in Aerospace Policy in the Ohio State College of Engineering marked the culmination of the event.

Astrosat specialises in innovative space technology and is working currently on a UK Space Agency project to stop deforestation of vast tracts of land in Guatemala in Central America, particularly where the country borders Mexico.

Mr Lee said: “Data and information from space sources is increasingly important in allowing countries which do not have significant satellite resources to implement action programmes on issues such as this which directly affect the lives of their citizens.

“Scotland, and Astrosat, have an increasingly important role to play in using the power of Earth observation. The sector is growing rapidly and will help drive a highly innovative economy forward, especially once the Prestwick Spaceport in Ayrshire gets up and running.”

George Kerevan, who is standing for re-election as MP for East Lothian, and has championed the Scottish space industry in Parliament, said, “I am delighted that Steve Lee has been representing Astrosat – and Scotland – at The Armstrong Space Symposium.

“Astrosat is a company of global importance, both to the space industry and to earth science, and I am consistently impressed by how it continues to break new ground in using satellite technology to diagnose or predict problems worldwide.”

The three astronauts signed a 12 string Taylor guitar which was commissioned by Steve Lee, a gigging guitarist in his down time, and presented to Dr John M Horack, (see release) who works alongside Astrosat and was responsible for inviting the Scots to the Armstrong Space Symposium