Scotland set to be warmer than Med 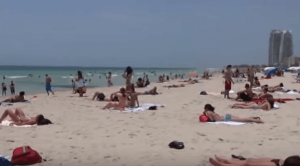 Parts of Scotland are expected to be warmer than the Mediterranean as the tourism industry prepares for a bumper start to the weekend.

Edinburgh will be hotter than Lanzarote and parts of Africa as Scotland prepares for its hottest May day since 25 May 2012 when it hit a record for the month of 30.9C at Inverailort in the Highlands.

The  temperature today hit 27.2C in Aboyne in Aberdeenshire, 25C in Inverness and Aviemore in the Highlands and 24C in Edinburgh and Glasgow.

Weather watchers say it could break the record this weekend. Some popular spots were mobbed, including Portobello beach.

The hot weather will last at least until Saturday with cooler temperatures expected on Sunday and Monday.