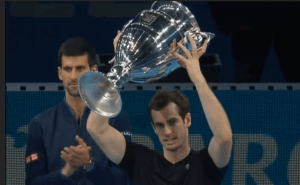 Scottish tennis player Sir Andy Murray has added £20 million to his personal fortune that maintains an association with a lucky number.

His £77 million value, revealed this weekend, puts him among Britain’s richest sports stars and will rekindle memories of his record-breaking Wimbledon victory in 2013.

On the seventh day of the seventh month of that year he became the first man to lift the men’s singles trophy at Wimbledon for 77 years. It was his seventh grand slam final and he broke his rival Novak Djokovic seven times. Djokovic was born seven days before Murray who  named his autobiography Seventy-Seven. The last Briton before him to win a Wimbledon singles title was Virginia Wade in 1977.

Sadly, Murray was unable to complete the sequence in this weekend’s Sunday Times list of the richest in British sport by appearing in sixth place.

The richest in sport: