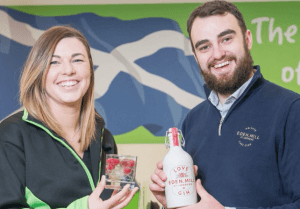 Four Scottish gin companies will have their products stocked in Asda supermarkets this month in deals worth a total of £800,000.

Eden Mill, Pickerings, Porter’s and Ginerosity Distillery have worked with the Craft Beer Clan which has a partnership with Asda.

Heather Turnbull, regional buyer for Asda Scotland, said gin sales are expected to increase by 50% by the end of 2017.

Daniel Sherry, head of business development at Eden Mill, added: “The gin and spirits industry has seen significant growth which we have experienced for ourselves.”

Chris Miller, Director at the Craft Beer Clan of Scotland, said: “The Craft Beer Clan works hard to promote Scottish spirits at home and abroad, and it’s fantastic we’ve been able to work with a major retailer such as Asda to drive these brands forward.

“The sprit sector, particularly gin, is renowned for its collaborations, so to be able to bring so many new brand listings to the supermarket stores across Scotland has been a great opportunity as we continue to build on Scotland’s reputation as a world-class producer of drink.”