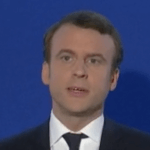 Markets rallied following the election of Emmanuel Macron as the next president of France.

The euro topped $1.10 for the first time since early November in early Asian trading following the vote, and riskier assets were expected to rally when other markets open.

However, the currency gave up early gains as concerns arose on whether his new party, rebranded La Republique En Marche, can secure a parliamentary majority in elections in June.

In his first statement, Mr Macron offered a message of hope and reconciliation. He vowed to “overcome every obstacle” to “build a better future” and “fight divisions” in the country.

He said: “A new page in our history is being turned. I want it to be one of hope and confidence recovered.”

In a further boost to stability in Europe, German Chancellor Angela Merkel‘s conservatives won a decisive victory in a vote in the northern state of Schleswig-Holstein, boosting her prospects of winning a national election in September.

The markets kick off the week on a positive footing after solid US employment numbers on Friday. Nonfarm payrolls surged by 211,000 last month after gaining just 79,000 in March. The unemployment rate dropped to a near-10 year low of 4.4%.