'I can't stand up much' says Prince

Duke of Edinburgh to retire from public duties 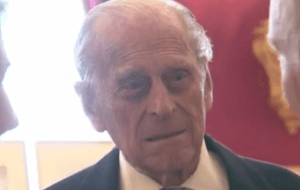 The Duke of Edinburgh is to retire from royal duties in the autumn, Buckingham Palace announced today.

Prince Philip, who turns 96 next month, is said to have made the decision himself and there were no health issues.

However, he is said to have joked today about no longer being able to “stand up much”.

The Queen has no plans to follow suit and “will continue to carry out a full programme of official engagements”, the palace said.

During a speech to mark the couple’s 50th wedding anniversary in 1997 The Queen said: “He has, quite simply, been my strength and stay all these years.”

The duke will attend previously scheduled engagements between now and August but will not accept new invitations.

He undertook 110 days of engagements in 2016, making him the fifth busiest member of the royal family, according to Court Circular listings.

He is patron, president or a member of more than 780 organisations and he will continue to be associated with them, but he will no longer play an active role by attending engagements.

In its statement, the spokesman said the duke “may still choose to attend certain public events from time to time”.

The duke divides public opinion between those who seem him as prone to making gaffes, and others who admire his dedication and support to the monarch over seven decades.

He is well-known off-the-cuff remarks, but also for the Duke of Edinburgh’s Award scheme, set up in 1956, which has inspired young people for more than 60 years in over 140 nations. Four million have taken part in the awards.

Prime Minister Theresa May offered the country’s “deepest gratitude and good wishes” to Philip on his retirement.

Scotland’s First Minister Nicola Sturgeon said the “steadfast support” the duke had given the Queen was “hugely admirable”.

She said: “He has always served with enthusiasm and a healthy sense of humour. I have always thoroughly enjoyed any time that I have spent in his company.”