Balfour Beatty moves seven into one 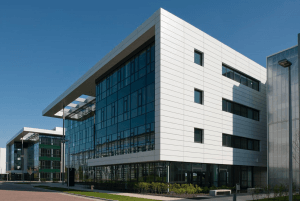 Infrastructure group Balfour Beatty is consolidating seven bases in Scotland into a single location at Maxim Office Park off the M8.

It is the largest office letting at a business park in the West of Scotland in the last year.

A Balfour Beatty spokesperson said it will “significantly reduce the cost of our Scottish office footprint.”

CBRE represented Balfour Beatty in the move to Maxim which will be home to more than 1,200 employees, working for  25 companies. The wider Eurocentral area now employs about 5,000.

* It has been reported that the 58,000 sq ft Quartermile 2 office building in Edinburgh has been put up for sale with a guide price of around £30m.

* Wirefox, a Northern Irish investment company backed by Hong Kong equity, is set to continue its Scottish spending spree with the purchase of the 116,978 sq ft Capella building in Glasgow for about £45m.