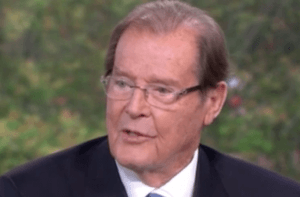 Moore appeared in seven Bond films, debuting in Live and Let Die (1973) until retiring from the role after A View To A Kill (1985).

His family confirmed the news on Twitter, saying he had died after “a short but brave battle with cancer”.

The statement, from his children, read: “Thank you Pops for being you, and being so very special to so many people.”

Moore died in Switzerland and will have a private funeral in Monaco.

In an acting career spanning eight decades he also appeared alongside American actor Tony Curtis in the Seventies television series The Persuaders.

He was born in London in 1927 and after working as a model in the early 1950s he signed a seven-year contract with MGM. His first break in TV came in the historical adventure series Ivanhoe followed by the cowboy western Maverick.

He was the longest serving actor in the Bond role, aged 58 when he last played the character.

A CBE in 1999 was followed by a knighthood in 2003, given to him for his charity work. His work with the children’s charity, from 1991, came about through his friendship with Audrey Hepburn, who worked with the same charity.

Known for his wit and not taking himself too seriously, he once told GQ magazine: “You can either grow old gracefully or begrudgingly. I chose both.

Moore is survived by his widow, Kristina Tholstrup, and three children.

He is the second star connected to the Bond franchise to die this week after Chris Cornell, singer of the theme to Casino Royale, was found dead