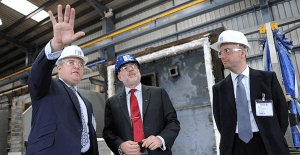 Element said it would pay Exova shareholders 240p per share in cash, representing a 10.7% premium to the stock’s closing price on 24 March before the Edinburgh-based company entered talks with potential buyers.

Exova shareholders will also receive a final dividend of 2.35p per share for 2016.

Exova’s laboratories test the safety and performance of products used in industries ranging from aerospace to pharmaceuticals.

Its chairman Allister Langlands said the takeover by Element “represents a good outcome for shareholders and the combination of Exova and Element creates a global leader in the testing market.”

The company revealed last month that it was in talks with several potential acquirers and had received proposals for a possible cash offer from Element Materials Technology.

Goldman Sachs and Investec advised Exova on the acquisition.

The company floated on the stock market in 2014 but its shares have struggled, although they have recovered over the last 12 months to their 220p flotation price.

Only last week it acquired SL Pharma Labs, a Delaware-based pharmaceuticals business. No details of the transaction were disclosed.