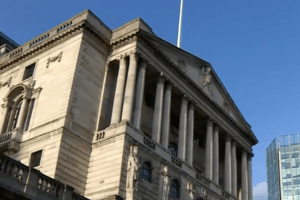 A secret recording that implicates the Bank of England in rigging the mechanism for fixing interest rates has been uncovered by the BBC’s Panorama programme.

The recording from the height of the financial crisis in 2008 adds to evidence the central bank pressured commercial banks to force their Libor rates down.

Libor is the rate that banks lend to each other and it sets a benchmark for mortgages and loans for ordinary customers.

The Bank of England said Libor was not regulated in the UK at the time.

The BBC says the recording calls into question the evidence given in 2012 to the Treasury select committee by former Barclays boss Bob Diamond and Paul Tucker, who went on to become the deputy governor of the Bank of England.

Libor, the London Interbank Offered Rate, tracks how much it costs banks to borrow money from each other. As such it is a big influence on the cost of mortgages and other loans.

He tells him: “The bottom line is you’re going to absolutely hate this… but we’ve had some very serious pressure from the UK government and the Bank of England about pushing our Libors lower.”

Mr Johnson objects, saying that this would mean breaking the rules for setting Libor, which required him to put in rates based only on the cost of borrowing cash.

Mr Johnson says: “So I’ll push them below a realistic level of where I think I can get money?”

His boss Mr Dearlove replies: “The fact of the matter is we’ve got the Bank of England, all sorts of people involved in the whole thing… I am as reluctant as you are… these guys have just turned around and said just do it.”

Panorama: The Big Bank Fix will be broadcast on BBC One at 8.30pm

> The Financial Conduct Authority and the Prudential Regulation Authority have begun an investigation into Jes Staley,  chief executive of Barclays who is accused of trying to identify a whistleblower in 2016.

Mr Staley has said that he thought he was allowed to identify the person. The bank and Mr Staley are both co-operating with the investigation.

The bank is making “a very significant compensation adjustment” to Mr Staley’s bonus.

John McFarlane, Barclays chairman, said: “I am personally very disappointed and apologetic that this situation has occurred, particularly as we strive to operate to the highest possible ethical standards.

“The Board takes Barclays culture and the integrity of its controls extremely seriously.

“We have investigated this matter fully using an external law firm and we will be commissioning an independent review of Barclays processes and controls to determine what improvements may be required.”