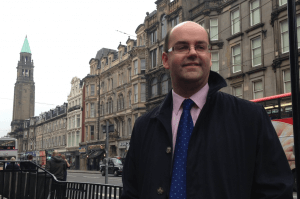 Retailers today challenged a call for control of business rates to be repatriated to local authorities.

A CoSLA representative this morning called for the move but David Lonsdale, director of the Scottish Retail Consortium said it would be a “retrograde step” that was opposed by businesses.

During a session of the Scottish Parliament’s Local Government Committee, he said: “Retailers are clear that we are not remotely satisfied with the unwieldy and costly business rates system as it stands, which is why the SRC led calls for the establishment of the current Barclay Rates Review.

“That should hopefully result in moves towards three-yearly revaluations, simplifying the administration, and making the system far more competitive.

“There needs to be a move away from ad hoc levies and supplements and complex reliefs which are just sticking plasters on a costly and cumbersome rates system.

“However, we are deeply concerned at calls for the rates poundage to be devolved to local authorities and believe this would be a retrograde step.

“Local councils are already able to reduce business rates in their areas, but so far this has been unused by all except two of the thirty-two Scottish local authorities.

“As a result the wider policy of local discretionary rates relief is at risk of being seen to be a flop. We are firmly opposed to repatriating control over the poundage rate to councils as it could lead to them treating businesses like cash cows, putting up business rates even further and hitting competitiveness.

“he reality is the current rates system is not fit for the modern digital economy and needs significant reform to make it fit for the future.”