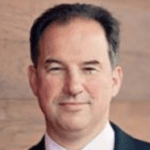 Scottish Chambers of Commerce has appointed property executive Tim Allan as president, succeeding Nora Senior who stands down after four years in office.

Mr Allan, founder and chief executive of Unicorn Property Group, the main developer in the Dundee Waterfront project, will serve in the non-executive post until March 2019.

He is the founder and director of Motor Fuel Group, the second largest independent fuel retailer in the UK with more than 370 stations, turning over £2 billion a year.

He is a Member of Court at the University of St. Andrews and was previously president of Dundee and Angus Chamber of Commerce, and chairman of Young Enterprise Scotland. He is vice chairman of the V&A Museum of Design campaign.

In 2010 he was a recipient of the Queen’s Award for Enterprise Promotion, and was made a Fellow of the Royal Society for the Arts, Manufactures and Commerce.

After 10 years in the British Army, including service as Equerry to the Duke of York, he spent seven years in private wealth management, working for Citigroup and UBS.