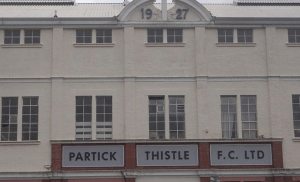 The money will come from Colin and Christine Weir, the Ayrshire couple who scooped Europe’s biggest-ever lotto win of £161m in 2011.

Victory over Motherwell at the weekend saw the Jags secure a top-six finish in the Scottish Premiership and managing director Ian Maxwell said: “It is an amazing thing to be able to announce and I don’t think the club will truly understand the difference it is going to make until we are 10-15 years down the line and we can see the benefits.”

No site has yet been earmarked for the project but it’s hoped to have the complex up and running within two years.

The Weirs will work with the club to design and build the new training ground to Thistle’s specification. It will then be leased to the football club on a long-term basis.

The Weirs, from Largs, have already gifted over £1.2million to Thistle’s youth academy set-up at Firhill.

“They have been absolutely incredible,” said Maxwell. “They’ve been great for the club over a number of seasons. They have helped with the academy and this is the next step. This is a real legacy statement.”

The new training ground will accommodate Partick’s first-team, youth and women’s sides, rather than the current set-up which sees them all travel around Glasgow to use facilities at various venues.

Chairman David Beattie said: “The money we currently spend on facilities around Glasgow will be used to service our lease and costs at the new ground.

“It reinforces that we are an established Premiership club, with a level of professionalism and ambition that these new facilities will reflect.”

A spokesman for the Three Black Cats, a company set up by the Weirs to provide long-term investment, said: “Thistle’s ongoing stability – through the club management’s financial prudence and through the board’s strong leadership – persuaded us that this development is a worthwhile investment.

“It will be an exciting project and we are keen to get on with securing land as soon as possible.”

Four years ago the Weirs established The Weir Charitable Trust which aims to support Scottish-based community groups and small charities to provide services across Scotland to help the Scottish community.