The Scotsman has got itself a new editor, although the really interesting item on Frank O’Donnell’s to-do list is boosting sales of the ‘i’ in Scotland.

Commenting on the appointment, Ashley Highfield, CEO of owner Johnston Press, may have spoken in the usual reverential terms about the 200-year-old Scottish title, but he knows it’s the upstart ‘i’, which it bought last year, that has been propping up the ailing group.

“Frank’s appointment demonstrates [our] commitment to see the development of The Scotsman brand in all formats and, along with the ‘i’ newspaper and our Scottish local titles, continue to grow our market share in Scotland”, he said.

You either have to admire Highfield’s optimism, or question his grasp of what is going on in JP’s northern outpost. Last year the company resorted to growing market share by selling The Scotsman with a bag, a packet of crisps and a pack of biscuits, all for £1, which is less than the newspaper’s cover price.

If O’Donnell is to grow market share, therefore, it suggests he will be spending a fair amount of his time reassuring his boss that The Independent‘s cast-off is keeping his dream alive north of the border.

Highfield has come under pressure from minority shareholder Crystal Amber to prove the board made the right decision when it staked more than £24 million on buying the ‘i’ from its Russian owner Evgeny Lebedev this time last year. Sales may have gone up, but so did JP’s debt which is costing it £20m a year in interest charges. 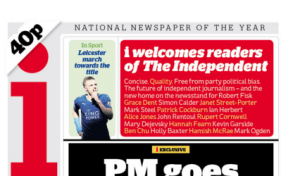 Analysts wondered why JP didn’t use the cash to pay down the debt and decided instead to put all its chips on another print publication when it was preaching a “digital first” strategy.

It’s another sign of the times that apart from running the The Scotsman and the ever-slimmer Scotland on Sunday O’Donnell, as editorial director, will also take control of the Evening News and collaborate with the editors of Johnston Press’s 28 Scottish weekly titles. He says he’s looking forward to “returning to the newsroom and working with many of the most talented journalists in Scotland”.

Well, that may help them feel all cuddly towards him, though there are far fewer of them than when he joined the company in 2000 and he’ll do well just to hang on to the handful who are left.

Last month the group reported a whopping £300m loss and indicated that the cutbacks and asset sales will continue.