Bank back to health 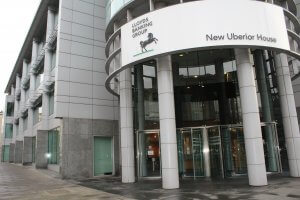 Lloyds Banking Group is expected to indicate a return to ‘normality’ and stronger profits growth when it unveils first quarter figures this week.

The Government has almost cut its stake in the bank to zero, nearly nine years after the 2008 bail-out and the numbers this week will therefore be a test of sentiment toward the stock.

In the corresponding three months last year headline operating profit came to £2.05 billion but net profit was just £531 million as the profit and loss account was hit by £149m of write-downs, £115m of conduct provisions and £161m of restructuring.

Russ Mould, investment director at AJ Bell, says: “If Lloyds can keep these three items under control it could be a very profitable bank indeed.

He says investors should watch for any comments on Brexit, the housing market, the MBNA purchase and the bank’s push into credit cards.

There may also be comment on the HBOS/small business scandal in Reading.

The bank, which owns Bank of Scotland, has today repeated its commitment to support first time exporters.

For the second year in a row, its Charter includes a promise to help 5,000 new exporters as part of a wider commitment to help 25,000 businesses trade overseas for the first time by 2020

Standard Chartered reports Q1s on Wednesday, followed by Barclays and RBS on Friday.