There has been a lot of talk about new towns lately. East Kilbride will celebrate its 70th birthday next month and, after 20 years of talking, East Lothian Council has given the go-ahead to a new community at Blindwells between Tranent and Longniddry.

Edinburgh’s New Town, the grand-daddy of them all, is marking its 250th anniversary. And there is another slowly reaching completion on the other side of the city.

Quartermile has been evolving from the derelict site of the former Royal Infirmary since just after it closed in 2001. Managing director of Quartermile Developments Paul Curran estimates that at its peak there could be 5,000 residents, workers and visitors occupying 31 buildings on a 19 acre site.

The company has worked with Foster & Partners to weave striking modern apartments between the 19th century hospital buildings. The site had become an eyesore because of the ad hoc addition of poor quality extensions and temporary cabins in the 1950s and 1960s.

“We could have tried to replicate the old buildings but it would have been a pastiche and the worst thing to do. I think the new buildings complement the old and they make subtle references to them through some of the materials and colours used,” he says.

The contrast is stark and, like it or not, the development is not only a new landmark for the city, it represents real estate gold dust. It has a gross development value last estimated at £650m.

Prices range from £300,000 for a one-bed studio flat to £2m for a penthouse. And there is no shortage of buyers. Some 40% are from overseas, including wealthy parents buying apartments for their children studying at the neighbouring university.

Many appear to have retained the properties as investments after their children have graduated.

“They will have made a decent return,” says Curran. “Prices here have held up very well.”

He explains that during the financial crash the company took the decision not to skimp on the quality of the build, nor did it cut prices. Instead, the build programme was slowed to ensure the company was not left with lots of empty units.

It seemed to pay off and even during the crisis purchasers bought up properties as they came on the market.

“I’d like to say it was good management,” he says, jokily, “though it was probably also a bit of good luck.”

Undoubtedly, being on the edge of a World Heritage site and having all the facilities offered by the city played a huge part in its ability to work through the downturn.

“It is location driven, with great views over the Meadows and close to the city centre and university. Apartments like this, in this sort of location, just don’t come around too often,” says Curran.

“The last residential block facing the Meadows has just been completed. There are 104 units and we sold 80% off plan. Since 2010 it has been difficult to keep up with demand.”

Apart from the former hospital buildings on the north side, which the university acquired, the last of the old blocks in the central square have now been converted and are ready for occupation. Veeno and Caffe Nero are moving in. Quartermile 4, an office block, is also complete, and the next block is close to being finished.

The area is now a base for homegrown businesses including Scotland’s two billion dollar companies or ‘unicorns’ – Skyscanner and FanDuel – as well as the law firms Morton Fraser and Maclay, Murray & Spen. It the headquarters for the Scotch Whisky Association. Sainsbury’s, Starbucks and Marriott Hotels are among the blue chip residents.

So could he sell more units if he could build more?

“If land became available next door we would be keen to buy it,” he says.

Curran’s other role in the industry is chairing the Scottish Property Federation which has just marked its 10th anniversary. It marked the event with a gathering of members, industry supporters and MSPs at a Parliamentary reception last week.

The organisation has been active in representing the sector on a range of policy matters, from planning fees and rates relief, to tax and the need to promote a private rented sector. However, Curran admits that it is yet to make the big breakthrough.

“We have established ourselves in the industry and with government and we are being listened to. But there is little action because it is a one-way street.

“We need to see government taking our concerns seriously and doing something about them.”

Property developers, he says, are hesitant because of decisions such as removing tax relief on empty premises. It discourages speculative building as developers have to find a tenant before they commit, or else take a risk on finding one.

“Landlords do not want premises sitting empty, but nor should they be penalised for trying to stimulate the economy and for taking on the risk,” he says.

Is there light at the end of the tunnel?

“No, not really. We’re told government is ‘looking at it’, but then we have other issues such as land and buildings transaction tax which not only penalises house buyers at the top end, it is also impacting on government revenues.”

Recent SPF estimates suggest the Scottish government could be £70m to £100m short of its LBTT revenue target.

“How can it be benefiting anyone? The higher tax kicks in too early and we now have a situation where it is more expensive to buy a million pound home in Scotland than in London.” 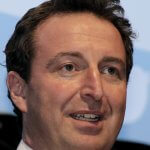 Career highlights: A chartered surveyor in the public and private sector and was involved in a number of high profile developments throughout the UK; Since 2009, managing director, Quartermile Developments.

In 2013, he led the corporate acquisition of Quartermile with the backing of the London-based private equity fund Moorfield.

A year later he was responsible for an £82 million deal with M&G Real Estate for the speculative development of the Quartermile 3 and Quartermile 4 office buildings. This represents one of the largest forward funding deals ever achieved in Scotland.