CBI sets out response to government

Ministers at Westminster have been urged to focus on closing the productivity gap across the regions and nations of the UK as a key focus of the UK government’s proposed industrial strategy.

The CBI has called for the margin between the best and worst performing parts of the country to be no greater than 15% by 2030 and says an independent commissioner should be appointed to ensure all regions of the UK have appropriate levels of devolution to deliver the Industrial Strategy.

It wants key performance indicators to be introduced similar to those used by business in order to measure the success of the strategy.

This should be supported, it says, by the establishment of an independent monitoring body similar to the Office for Budget Responsibility to measure progress against specific performance targets and to provide impartial advice on where the Government should concentrate its efforts.

It wants a private-public partnership built around a UK2030 brand to energise and unite the public and private sectors towards success.

“The Government’s Great Britain campaign has shown in recent years how a powerful UK brand, initiated by the Government, can have a significant impact,” it says. 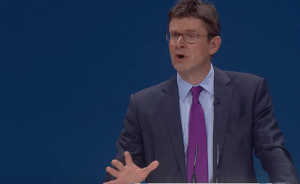 The proposals form part of the CBI’s response to the Green Paper on Building an Industrial Strategy led by the Business Secretary Greg Clark (right).

The CBI says that “a modern Industrial Strategy with a clear sense of purpose will improve living standards and raise productivity.

“It should aim to reduce the productivity gap between the worst and best performing regions by 15 percentage points by 2030.”

The CBI wants the Government to commit to setting other targets that will measure the success of the new strategy, including: income levels, employment rates, income distribution and how economic activity is dispersed across the country.

It says “businesses in every sector and of all sizes are committed to working with the Government to make this happen.”

Carolyn Fairbairn, CBI Director-General, said: “The UK is at the foothills of extraordinary change as we look to redefine our role in the world and adapt to rapid technological advances in the workplace.

“A new Industrial Strategy must aim to make the UK economy the most competitive in the world by 2030.

“We must build on our leading knowledge base, drive a renaissance in our traditional heartlands of manufacturing and create a new wave of entrepreneurship by making the UK the easiest place to start and grow a business. By doing this we can raise productivity and improve lives in every community up and down the country.

“This vision should not be created solely by business, nor by Government. It must be created and owned by business, government and society together. To make this happen, it must be underpinned by a partnership between business and government that is the best in the world, based on trust and shared interest.”