Hartley successor to be named ‘within 48 hours’ 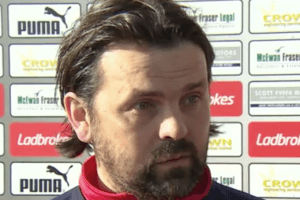 Dundee expect to have a new manager in place within 48 hours, according to managing director John Nelms.

He indicated that an appointment was close after the club parted company with Paul Hartley following a run of seven straight defeats.

Following a board meeting,  Nelms said: “Unfortunately, the business we are in, sometimes change is necessary to achieve the goals we have set.”

Nelms informed the players of the decision and commended Hartley on his commitment.

“I think somebody in the near future is going to get a good, hard working manager,” he said.

He later confirmed those on his short-list are Scottish-based, are available now and are familiar with the Dundee players.

This seemed to rule out likely favourite Alan Stubbs, who led Hibs to a historic Scottish Cup  victory last year before leaving for an unhappy few months at Rotherham United.

Nor will the appointment be in-house. Nelms has already told current skipper Darren O’Dea and club captain James McPake they will not be needed as an interim managerial pairing.

Gerry McCabe, Hartley’s assistant, has agreed to take training until the new interim appointment is made.

Hartley succeeded John Brown in February 2014 and guided the club to the Championship title the following season.

On the club’s return to the Premiership he secured a top-six finish and last season ended the campaign in eighth place.

He was named manager of the month just two months ago.