A fifth of Scottish shops are at risk of closure over the next decade unless urgent action is taken, according to a new report on the sector.

The Scottish Retail Consortium has produced research into productivity and innovation warning of dire consequences caused by rising costs and the challenge of online shopping.

What’s Next, the future of Scottish retail examines the impact of technology and customer choice.

The SRC believes urgent action is required to respond to the unprecedented challenges resulting from the transformational change the industry is undergoing. These include: 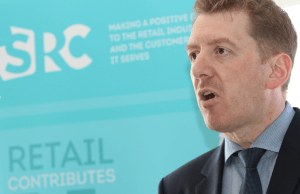 Andrew Murphy, SRC chairman (left), said: “The retail industry is undergoing the most profound transformational change of the last fifty years. Scottish retailers are being forced to adapt their business model at pace to a new world where digitally enabled customers have more information, wider choice, lower prices and multiple fulfilment options.

“This has enormous implications – especially for long established businesses.

“As sales move online, retailers will have to invest in their online and multi-channel offers while reducing the number of shops they operate from and repurposing those that remain.

“That will lead to retailers having to redesign jobs and often reduce the number of roles they offer in Scotland; reducing their physical presence to only the most powerful locations.

“Government faces a stark choice. They can create a positive business environment promoting the conditions for constructive investment in business model change and creation of quality jobs, or they can continue on the current path of largely ignoring the systemic problems and allowing increasing costs to fall on retailers.

“Such an approach will curtail investment in stores and result in fewer jobs, hollowed-out town centres and lower tax revenues.

“This paper sets out the case for a positive economic strategy which will create higher paying, more productive retail jobs in Scotland.”