Change of focus for department stores 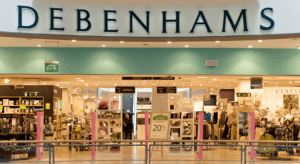 Debenhams is to consider closing 10 of its department stores and will switch the focus of its offering by dropping some brands.

Marks & Spencer later named six stores in England that it is closing.

But up to 10 stores are to be reviewed for closure over five years “should these stores not meet our required return thresholds”. There was no detail on which stores are up for review.

The company is expected to withdraw from some non-core international markets.

It has begun talks on the closure of a central distribution centre and 10 smaller regional warehousing facilities.

In a statement today the company said: “The objective (is) to define clearly what Debenhams stands for and simplify the way we operate to benefit customers today and therefore shareholders in the future.”

Debenhams’ shares have fallen by a third over the last year and said it needed to upgrade its mobile systems, supply chain and its store estate.

It will allocate £150m a year to capital expenditure, a £20m rise on current spending on the estate.

The company said 2,000 more staff would switch to customer facing roles, while there will be more emphasis on replenishing stock, an issue raised by Edinburgh-based analytics firm Mallzee which has urged clothing retailers to reconsider their discounting policy and focus on stocking issues.

Marks & Spencer indicated previously that some stores were facing closure. Today it said 380 staff would be affected but they would be guaranteed redeployment at a nearby store.

M&S will also open 36 stores over the next six months, creating more than 1,400 jobs.

CEO Steve Rowe said the closures were due to customers’ changing shopping habits.

“We are committed to adapting our business so that we stay in tune with our customers,” he said.

The stores to close are in Portsmouth, Slough, Warrington, and Wokingham, along with Simply Food stores in Monks Cross near York and Worksop.

Retail sales volumes contracted 1.4% un the first quarter after rising 0.8% in the last three months of 2016, the Office for National Statistics said.

It was the biggest quarterly decline since the first quarter of 2010.

Director of the Scottish Retail Consortium, David Lonsdale, said: “This is further evidence that household finances are facing choppier times.

“Consumer demand has often proven a reliable source of growth in the economy but this will be tested in the period ahead, as Scots find themselves buffeted by rising overall inflation and with higher council tax and higher employee pension contributions in the pipeline.

“They will at least have the solace of knowing that income tax rates won’t rise this year, which would have taken money out of people’s pockets.

“Scottish retailers will be looking for the political parties in their UK General Election manifestos to prioritise measures which bolster disposable incomes and help consumer spending take wing.”