SNP plans to create a new institution that could become a central bank have been revealed.

Newly-disclosed papers disclose proposals for a Scottish Monetary Institute controlling the financial and economic affairs of the country. It would employ up to 450 staff and cost £50 million a year to run.

The documents, released under Freedom of Information legislation, show that the SNP was planning for a new organisation to control the country’s financial affairs in the event of success in the 2014 referendum.

The institute is likely to remain an option for the SNP’s Growth Commission being led by former MSP and public relations executive Andrew Wilson.

The plan has already fuelled claims that a “central bank” for Scotland would add to the costs of running an independent Scotland.

The creation of such an institution has been a point of contention for many years unless Scotland was to remain under the effective control of London-based bodies such as the Bank of England.

The documents state that: “Should Scotland be required to have a separate central bank the functions of the SMI can be expanded to fulfil the requirements.”

The papers also reveal that officials were looking at the option of a separate Scottish currency.

But opposition parties focused on the added costs to the Scottish budget. Scottish Conservatives accused the SNP of “deliberately” misleading the public in their 2014 whitepaper on independence – “because they knew the EU could trash their plans”.

The Tories claim the SNP knew that their plans could break EU rules and notes that the paper raises questions over the “continued use of sterling and the EU requirement for new member states to aim for convergence to adopt the euro”. 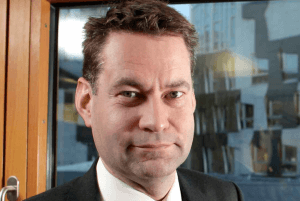 Scottish Conservative finance spokesman Murdo Fraser (right) said: “At the same time as Nicola Sturgeon was confidently preaching that we could keep the pound and share the Bank of England’s functions, she knew the EU could ruin those plans.

“The SNP can’t even confirm whether they want to be part of the EU any more. If this is the level of their attempts to face two ways, then no wonder.

“Not only that, but their plans for a separate Scottish Monetary Institute would be extortionate, with hundreds of staff needed even if the Bank of England maintained responsibility for a ‘large’ number of functions.

“Given how damaging these documents are, it’s not surprising that the SNP Government covered them up for years and ended up releasing them on Easter weekend.

“We already knew the SNP’s economic plans were built on sand. Now we have clear proof they were actively misleading the public.”

A Scottish Labour spokesman said: “The fact that the Nationalists didn’t publish this information at the time just shows how little credibility even they thought their currency plans had.”