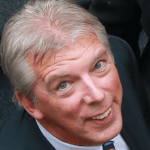 Mr Bunker began his career with the Scottish Assessors Association before a long career in private practice.

Graham + Sibbald has more than 200 employees and 25 partners working across its 15 UK offices which are largely based in Scotland supported by a base in London.