Call boxes to be removed 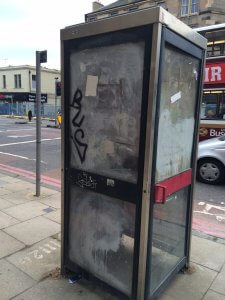 Almost one in five public phone booths are to be removed from Scotland’s streets as usage has plummeted.

BT has agreed to take nearly 1,000 out of service over the next three years.

The company said usage had fallen by 90% over the last 10 years as more people rely on mobile phones.

BT said 700 of Scotland’s phone boxes did not handle any calls at all in the past year.

Rural areas will see the biggest purge with Aberdeenshire (85), Dumfries and Galloway (75) and Fife (97) seeing phone boxes all but disappear.

BT will talk to local communities about adopting phone booths. More than 155 have already been taken over in Scotland who use them for such purposes as mini libraries, food kiosks or art galleries.

It’s not known which, if any city centre phone booths will be removed, but some have become eyesores through mis-use and neglect.