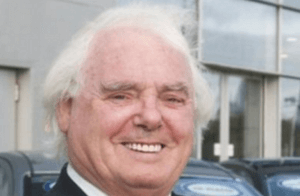 Sir Arnold Clark, the founder of the eponymous car dealerships, has died aged 89.

A statement said he had passed away peacefully, “surrounded by his family”.

It added that Sir Arnold, who was knighted in 2004, was “an inspiration” and said “the family will continue to carry on his vision”.

The company which bears Sir Arnold’s name has 200 dealerships across the UK and posted profits of £107.2m in 2014 on sales of £3.2bn. It is Europe’s largest independently owned, family-run dealership.

The Glasgow-born billionaire, who latterly lived in Killearn, set up his first showroom in 1954 after leaving the RAF. In 2016 he was confirmed as Britain’s first billionaire car dealer.

The statement from his family said: “Sir Arnold Clark away peacefully this morning surrounded by his family. He was a beloved husband, father, grandparent and a great friend and employer to many.

“He was an inspiration and the family will continue to carry on his vision. He will be greatly missed.”