Danish ballet legend Peter Schaufuss has acquired one of Edinburgh’s landmark churches from the man behind one of the world’s biggest-selling computer games.

Mr Schaufuss is the new owner of Saint Stephen’s in Edinburgh’s Stockbridge area and will continue to be used for arts performances.

The grade-A building was acquired three years ago by Edinburgh-based charity The Benzies Foundation, run by Leslie Benzies who was one of the brains behind the global sensation Grand Theft Auto.

It has been used as a venue by a number of local community groups and the Edinburgh International Festival for the last two years.

He has artistic connections to Edinburgh through his parents who featured as principal dancers in Sir Frederick Ashton’s legendary production of Romeo and Juliet with the Royal Danish Ballet at the International Festival in 1955. He is a previous winner of the Edinburgh Critics Prize. 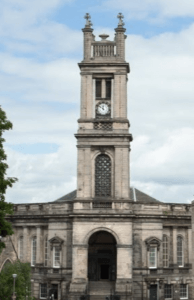 Saint Stephen’s Stockbridge was designed by architect William Henry Playfair and has been hailed as one of the most important Georgian buildings in the area.

Mr Schaufuss plans a dramatic “Theatre in the Round” as the centrepiece in the main room, which will attract year round local, national and international dance companies.  Other local arts and community operations will also continue to benefit from the venue following the sale.

Philip Johnston, trustee for The Benzies Foundation, said: “The building has served many local community groups over the years and we value its long term viability.

“This was an entirely philanthropic purchase by The Benzies Foundation back in 2014 and significant investment and improvements have been made since then.

“It was always our intention to keep the building in use and available as a community space whilst securing a sustainable future.

“We now believe we have taken this as far as we can. All proceeds from the sale will flow directly into The Benzies Foundation, which helps to promote health and fitness amongst communities within Scotland by providing scholarships to individuals or teams who are enthusiastic but financially unable to participate in their chosen sports.”

The new owner intends to complete the refurbishment of the building to take the venue to the next level.

Mr Schaufuss added: “I plan to make the Great Hall a world-class theatre, one that will attract productions from leading companies.

“I have consulted with many people and public organisations in Edinburgh and I am happy to say that all share my enthusiasm, not least because they want to ensure that Saint Stephen’s will continue to hold its place in the affections of all who know it, but also because we can all see how well suited it is to become one of the capital’s major centres of artistic excellence.”