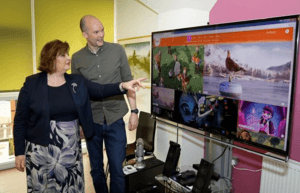 The support will enable the Glasgow business to enter new international markets and to create 20 jobs over the next 12 months.

On a visit to the studios, Culture Secretary Fiona Hyslop, said: “Scotland’s creative industries sector has been growing steadily for the past few years and we are committed to continuing this upward trend.

“The Scottish Government and our agencies continually strive to support our creative businesses to thrive and attract more companies in this important growth industry.”

Founded in 2000, the Axis Studios group consists of Axis, Flaunt and axisVFX, with additional studios in London and Bristol supporting the Glasgow HQ.

The company recently worked with Mattel to deliver two animated feature films for Monster High. It also services the visual effects market, particularly in television on shows such as Dr Who, Our Girl and Shetland.

Axis has doubled its space at the Skypark in Glasgow to allow for a Scottish-based headcount of more than 180 employees.

As a result of this expansion, the company aims to increase turnover to more than £15m by 2018, three times that of its 2015 turnover.  The 20 additional jobs created will comprise computer graphics artists, R&D development and production managers.

CEO Richard Scott said: “This is an incredibly exciting time for Axis – all three of our studios and locations are growing. We’ve always had a ‘get out there and get it done’ attitude and the support we’ve received from Scottish Enterprise has helped us achieve even more.”

Scottish Enterprise has worked intensively with Axis Studios over the last three years through its account management approach, providing support with projects to improve business efficiencies and ICT, and to research and enter overseas markets.

David Smith, sector director at Scottish Enterprise, said: “Scotland is home to a wealth of creative and digital companies that are making a global impact.

“Axis Productions is a great example of this as it embarks on its next phase of scaling up, which we can support with mechanisms like regional selective assistance funding.  Investing in growth and competitive advantage is critical for the long term future of Scotland’s creative industries.”

Natalie Usher, director of screen at Creative Scotland, commented: “As highlighted in our recently published Review of the Scottish Animation Sector, this is a sector populated by highly-skilled, talented and ambitious individuals generating excellent and innovative work.

“Axis is a great example of this. However, the Review also identified a number of challenges to the sustainability of businesses and careers in the sector. Support like this announced today, contributes significantly to the continued development of Scotland as an internationally significant centre for animation.”