As Theresa May declines TV debate...

Osborne to leave Commons to focus on Standard 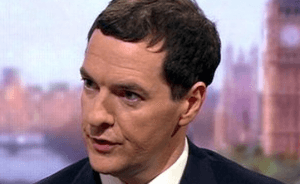 Former chancellor George Osborne has announced he is to leave the House of Commons to focus on his new role as editor of the Evening Standard newspaper in London.

His decision to resign his seat comes ahead of the General Election called by Theresa May for 8 June and was reported by his newspaper.

In a letter to voters in his Tatton constituency, he says: “I am stepping down from the House of Commons – for now.

“But I will remain active in the debate about our country’s future and on the issues I care about, like the success of the Northern Powerhouse.

“I will go on fighting for that Britain I love from the editor’s chair of a great newspaper. It’s still too early to be writing my memoirs.”

He adds: “At the age of 45, I don’t want to spend the rest of my life just being an ex-chancellor. I want new challenges.”

Mr Osborne’s decision follows pressure on him to step down amid claims that doing both jobs would be a conflict of interest. Boris Johnson, the Foreign Secretary, gave up a lucrative column in the Daily Telegraph.

For Mr Osborne, departure from the Commons marks a remarkable turn of events for a man who just a year ago was jostling for 10 Downing Street.

The Brexit vote on 23 June changed everything and when Prime Minister David Cameron resigned he was replaced by Philip Hammond.

Theresa May, who succeeded Mr Cameron in Number 10, has indicated that she will not take part in any televised debates during the election campaign, nor will she campaign on the streets.

Opposition party leaders are urging the television companies to go ahead with the debates and to “empty chair” the  Prime Minister, or leave her chair unoccupied as a symbol of her refusal to take part.