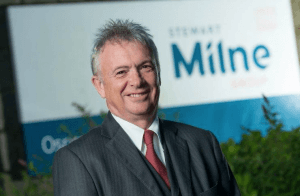 Stewart Milne Group has seen its turnover and operating profit take a hit from challenging market conditions in the North-east of Scotland.

The group has also disposed of non-core assets, such as non-residential properties.

Glenn Allison, group chief executive, said: “Disposing of these assets allowed us to invest in ten new developments in the areas of our business where the housing market is strongest, namely Central Scotland and North-west England.

The strong sales performance that we have experienced on these developments since the year end has more than justified that investment.

In the Autumn of 2016, Stewart Milne Group secured a three year, £185m banking facility with Bank of Scotland, part of Lloyds Banking Group.

Stuart MacGregor, group finance director, said: “Underpinning and supporting our growth strategy is the extension of our banking facility. This, coupled with the growth we have delivered subsequent to our financial year end means that we are financially robust and on-track with our ambitious medium to long-term growth plan.

“In common with all house-builders who operate in North East Scotland, we have faced a very difficult period in the local market where the downturn in the oil and gas sector has had a major impact on consumer confidence. We have responded to this by ensuring that we focus on providing quality family homes for which demand remains solid.”