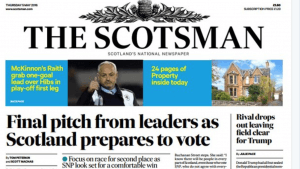 Johnston Press, owner of The Scotsman newspaper, has reported an annual operating loss of £300 million and said it continues to look at cost-cutting to ensure it has cash in the business to cover its outgoings.

The loss took account of a £344.3 million asset impairment charge of which £223.9m was taken at the interim stage. It said the write-down on publishing titles and print assets reflects the current trading performance of the group.

Excluding the impairment charge the company reported an adjusted operating profit of £42.1m for the year to the end of December, down 14.5% from £49.3m in the previous year.

A rise in sales of the ‘i’ once again helped prop up a slump in sales of other titles which include Scotland on Sunday, the Edinburgh Evening News, Falkirk Herald and the Yorkshire Post.

The total value of the publishing titles it owns is £120m and the company now has net assets which are less than “half of its called-up share capital.”

The company identifies a need to further reduce costs and streamline its management and reporting structure.

“This is an area of ongoing management attention. The group has continued to find operational efficiencies as total revenue has declined. Clear organisational and reporting responsibilities are in place,” it says in a statement.

The company has interest costs of c£20m and pension contributions of £10.3m.  It says further downward pressure on revenues “could reduce operating cashflow below the level required to service interest and pension commitments”. The company has been selling assets to ensure there is cash in the bank to meet these costs.

Cash at bank was £16.1m for the period ended 31 December 2016. The East Anglia and East Midlands title disposal completed in January this year, generated £17m of cash proceeds.

Camilla Rhodes, interim chairman, said: “2016 saw further profound change in our business and we have again faced the combined headwinds of further structural change in our industry and significant economic and market setbacks – not least the impact of the run up to and aftermath of June’s referendum on the UK’s membership in the European Union.

“The management team remained focused on improving the performance of the business within its control, but in particular the third quarter saw a significant downturn in advertising activity, especially in the recruitment and property market, and a distinct improvement in quarter four.

“During the year we have undertaken a number of initiatives in order to enable the business to adjust to the continued downward pressure on print advertising revenues.

“Our sales teams have been reorganised and retrained to better equip them for the commercial environment in which we now operate and we have sought to reset our digital offering across a range of fields (including, for instance, discounting lower margin digital offerings).

“We have made important changes to the Group’s portfolio of titles and our newspaper printing business has also had a successful year with several significant contract tender wins.”

Chief executive Ashley Highfield added that “due largely to the EU Referendum impacting SME marketing and recruitment decisions, digital revenue (including classifieds) was down for the year. Digital revenue was significantly impacted by a very difficult market for classifieds, particularly for jobs.

“Excluding classifieds, digital revenue was marginally higher in 2016. The fourth quarter improved significantly over quarter three, returning the business to digital revenue growth as we exited 2016.”

He reports signs of a slight upturn. “At the time of writing in late March 2017, we have seen a continuation of the improving advertising and circulation trends we witnessed during the fourth quarter of 2016, enabling our digital business to return to revenue growth.”