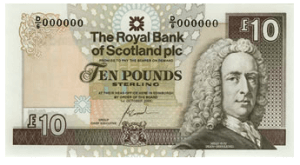 Royal Bank of Scotland is to close a further 30 branches in Scotland, putting jobs under threat.

The bank said there would be 74 full-time equivalent job losses, but it is understood that many are part-time workers and that more than 220 individuals will be affected.

It is also closing 128 NatWest branches in England, taking the total job cuts to 470. Altogether 770 staff are affected but 300 will be transferred to other roles.

In a statement, the bank said: Following a review of the RBS branch network a decision has been taken to close thirty Royal Bank of Scotland branches.

“We…have made the decision to close these branches after careful consideration of a wide range of factors including regular branch usage and the alternative ways our customers can bank with us.

“We have seen a dramatic shift in the way our customers are choosing to bank with more using mobile and online over traditional branch counters. Simple transactions undertaken in branch at Royal Bank of Scotland have fallen by 36% since 2010, while online and mobile transactions have increased by more than 400%.

“We are committed to ensuring our customers and communities are able to continue accessing quality banking services. As part of this, we have created a brand new role in Scotland – Royal Bank of Scotland TechXperts who will support customers by setting up, demonstrating, showing them how to make the most of online and mobile banking and advising them on how to stay safe and secure.

“Furthermore, we have listened closely to feedback from local communities and have extended the time between announcing our decision and the branch closure to six months.

“This has been done in order to ensure our customers have time to consider the right banking options for them. Customers will also have a range of alternative ways to bank, including: online and mobile for simple transactions, telephony, and webchat for assisted help and branches, mobile branches and the Post Office for face to face interactions.”

An RBS spokesperson said: “Many more customers are choosing to do their banking using mobile and online services over traditional branch counters.

“We interact with our customers over 20 times more through digital channels than physical ones. Half of our personal customers in Scotland are mobile banking users; grown from 500,000 to 900,000 since 2014.

“As customers change the way they bank with us, we must change the way we serve them. The role of the branch is fast moving to a centre for advice, away from basic transactions. While the branch will still be a core part of our offering to customers, inevitably some branches will have to close.

“We know that some of our customers prefer to do their everyday banking face to face and we will help them with the alternative ways to bank in their community through our Community Bankers and Royal Bank of Scotland TechXperts”.

In Scotland around 176 FTE will be impacted, 101 FTE mapped to suitable alternative roles and expected final impact of 74 FTE.

“While more people might be doing online banking, that’s no good for cash-based businesses or for rural firms with poor broadband.  As the big banks shut down branches in chorus, it unfortunately seems like the banking industry is content to leave some customers behind.”

In a further jobs blow for Scotland the electronics company Jabil said about 260 jobs will go when it closes its manufacturing operations in Livingston.

The US-owned company expects to end manufacturing by the end of this year following a “phased run down”.

Jabil said there was “unsustainable” demand to support manufacturing at the West Lothian site.

The news follows the recent closure announcement at the Johnson & Johnson healthcare plant in the town.